The Roger Centre Court and the History of Tennis Shoes If adidas gave the world the “original” tennis shoe in the iconic Stan Smith, On brings us the tennis shoe of today in The Roger Centre Court. Developed with tennis legend Roger Federer, the tennis-inspired sneaker is a sleek step into everyday fashion for the performance brand.

The appeal of a classic white sneaker has been around since the early 1900s, as agile athletes darted across tennis courts in their canvas shoes. But what is different about The Roger Centre Court, and when did tennis shoes make the jump into mainstream fashion? We find out.

ON RUNNING THE ROGER CENTRE COURT

While On Running has recently released a range of lifestyle shoes with the likes of The Roger Advantage  and The Roger Clubhouse, The Roger Centre Court is the first shoe On has created as a nod to tennis and the heritage of tennis shoes. Further, it’s yet another branch beyond their original running audience, to include more mixed, active lifestyles. The inspiration for The Roger Centre Court comes from the point where performance and style intersect – and it shoes in every part of the shoe.

It carries a timeless aesthetic of a classic tennis shoe, while combining the lightweight comfort of On’s signature CloudTec midsole and very clever, hidden Speedboard for all-day wear. Also within The Roger Centre Court is an ultra-soft built-in sock construction so you can take every step with more agility and without distraction. Are On Running Shoes Sustainable?

The designers at On Running and Roger Federer himself, were committed to making The Roger range a consciously crafted one. The Roger Centre Court uses vegan leather that has been specifically designed for lightness as a way to reduce material consumption, as vegan leather has approximately 30% of the footprint that animal leather creates.

The upper of The Roger Centre Court features recycled materials too. The mesh around the collar which supports the Achilles and even the laces are made from 100% recycled polyester. The result is an unbelievably comfortable, fresh take on a classic shoe, with a significantly reduced environmental footprint.

The team at On Running have re-engineered the modern day tennis shoe. Let’s take a look at where tennis shoes began.

THE HISTORY OF TENNIS SHOES

Early tennis shoes of the 1800s were the plimsoll shoe – a simple design of a rubber outsole and a canvas upper. A far cry from the technical shoes we see gracing clay courts today. However in 1839, the footwear began to evolve. Charles Goodyear developed vulcanised rubber (a chemically altered form of rubber that is stable and heat-resistant), and soon brands started including this new technology into their shoes. Combining canvas and vulcanised rubber allowed for more stability in this emerging athletic shoe, and with this technology came the opportunity for creativity and the birth of early tennis shoe icons.

In 1916, The United States Rubber Company released the still-famous Keds, which became the first widely popular shoe of tennis. Later, in 1917, Converse entered the market with the All-Star and later Chuck Taylor, initially poised for basketball. It actually wasn’t until many years later that adidas hit the athletic footwear market with their first canvas and rubber tennis shoe in 1931. It’s the 1960’s. At this stage, the combination of canvas and vulcanised rubber is the dominating player in tennis, or at least the one on the feet of every tennis player. In a complacent marketing, ripe for innovation, adidas ushered in the first leather upper on a tennis shoe. The materials provided more structure and stability.

Endorsed by French player Robert Haillet in 1964, the shoe, in his namesake, garnered early attention. However, Haillet retired from the sport just a few years after the launch of the shoe, therefore adidas sought another reputable name to build credibility for their new product. Cue in, Stan Smith.

After being approached by adidas, Stan Smith wore the then-Haillet’s when he won his two Grand Slam singles titles in 1971 and 1973. Following his athletic achievements affiliated with the shoe, Smith earned his place as the new face (and name) of the shoe that is now recognisable around the world. As part of the evolution of Haillet’s to Stan Smith’s, Smith advised that adidas build in more protection for the Achilles – and the famous green padding on the back of the shoe was added. When did tennis shoes become fashionable?

Athletic success put tennis shoes on the public radar. Following the sports icons paving the way for this style of footwear, tennis shoes became a popular option for shoppers living active lifestyles. Their popularity skyrocketed in the 1990s when budgets in sports marketing made tennis shoes more visible than ever, and they consequently became a stylish option of sporty expression and not solely sport performance. Today, tennis shoes are the go-to kicks many of us reach for on a daily basis.

Whether you are a firm fan of the Stan Smith, or keen to switch up your style with something from The Roger range, it’s safe to say that tennis shoes will remain a staple in fashion no matter the trend. It’s an exciting time for footwear, and we can’t wait to see what On Running will do for future iterations of their lifestyle collections. The next time you get ready for an on-the-go day, why not slide into a pair of sleek Centre Courts? 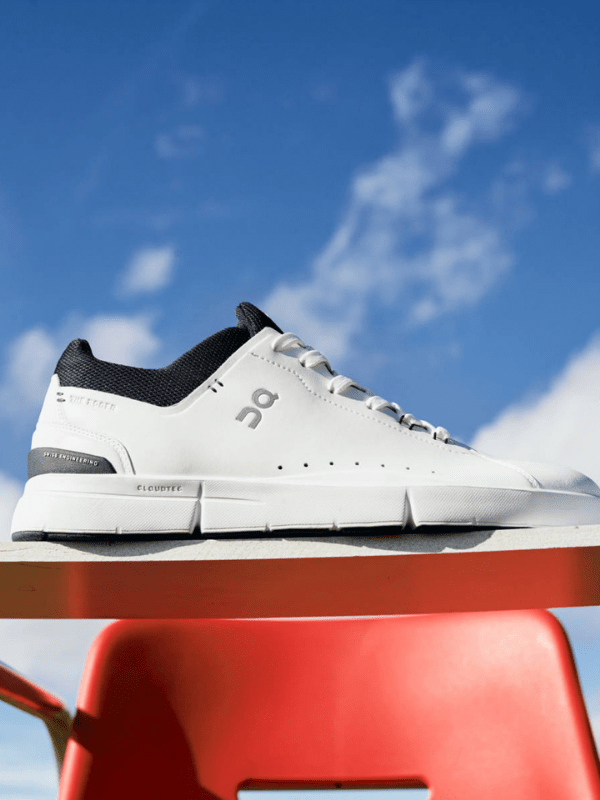 How to Style Veja Sneakers?

On Running unveils its hero "everything" shoe in the Cloud X. Here's a firsthand review of this multifunctional trainer.

Which On running shoe is for you? We review the Cloud, Cloud X, Cloudflow, Cloudswift and Cloudbeam.

Triathlete Matthew Low from SwimBikeNike gives a deep-dive review of the On Running Cloud.