On has made a big splash in its relatively short existence, and now has the accolade of being the fastest growing running shoe brand in the world. Founded in 2010 by a three-time world duathalon champion and multiple Ironman winner Oliver Bernhard, together with his friends David Allemann and Casper Coppetti, the vision from the off was to come up with a fast and truly revolutionary running shoe. Whilst that term gets bandied around too much, in On’s case you just have to look at the Cloud or Cloudflow to realise that these are unlike any other running shoes on the market.

They set out to solve the two perennial problems in distance running shoes: of combining a cushioned, soft landing with a firm, responsive take-off; and a highly cushioned shoe that is also extremely lightweight. Plenty of shoes on the market are good at one or the other, but not both. Distance shoes tend to be either fast, responsive and lightweight; or comfortable, cushioned and heavier. On has come up with a shoe design that genuinely delivers on both fronts, built around two main innovations.

The most visually distinctive feature of any On shoe is the hollow little ‘clouds’ or pods that run the length of the sole, adding cushioning and dispersing pressure, but also because they move laterally as well as vertically, they propel you forward and transition quickly. The video below illustrates this; the Clouds disappear on landing as they cushion the stride, but quickly pop back to drive your push-off. This unique feel to the shoe is apparent from the first time you put them on.

There is a central channel in the middle of the shoes which allows the individual cloud components to move separately, providing a natural range of motion and best responding to the individual runner’s gait. The CloudTec® sole in all On shoes is made from ‘Zero-Gravity’ foam, a signature EVA compound that is superlight, flexible and responsive.

These pods are combined with a central "Speedboard" running down the centre of the sole unit. This is a responsive, semi-stiff board made of a matrix weave of plastic, that promotes the natural rolling process in a stride, adding rigidity, and thereby helping energy transfer and delivering more explosive toe-offs. If the sole were allowed to fully flex, more potential energy would be lost.

Nailing cushioning and responsiveness is the holy grail of a running shoe, and On really has delivered something special through some very clever Swiss engineering. When you head out on your first run you will notice three things, how ridiculously light they feel, how soft the landing is and the fact that you are lifting your knees higher than usual. Taken together these things equate to more speed. Each of the Cloud, Cloud X and Cloudflow weigh around 220-230g for a men’s UK size 8, which is circa 100g lighter than shoes such as the adidas Ultra Boost (310g) or ASICS Kayano 25 (336g). To put that in context, several studies* have shown that an extra 100g per shoe increases times by c.1.1% over 3000m. Apply that +1% to a marathon or longer distance and you’re talking about a lot of time.

It says something that some of the leading triathlon and Iron Man athletes of all time, the likes of Tim Don and Javier Gomez, train and complete in the same On Cloudflow shoes.

Whilst the key innovation in On running shoes is in the CloudTec sole, the seamless uppers also play an important role, continuing the trick of balancing comfort with ultra light weight. The uppers hardly add any weight to the shoe, but the mesh is extremely strong and reinforced with taping in key locations to provide a secure, supported feel. They are extremely breathable, and the mesh is springy enough to allow your foot to move adequately through the stride. Overall we found the last on all three On models we tried, the Cloud, Cloud X and Cloudflow, to be very comfortable. In terms of fit, On shoes tend to be cut quite narrow, especially in the heel, which gives a nice locked in feel, but for runners with wider feet you may need to get a size larger than normal. Though if you have normal to narrow feet, I’d say they run true to size. The slightly narrower shape is also more pronounced in the back of the shoe, and they do splay out in the toebox to ensure more space and comfort.

Which shoe is for you?

The shoe for you depends on what you want to use them for:

The Cloud is the most street styled shoe, a blend of style and performance. Its speed lace system makes it easy to slip on and off, and it is ideal for an everyday shoe, running anything from errands to a 5k. It combines the best of both worlds in that it is very lightweight but also well cushioned. In the case of the Cloud the speedboard is fairly lightweight and flexible, which is why the shoe is so comfortable. The easy on and off also makes it popular with triathletes. But overall I’d buy this more as an all-rounder, in the ‘active life’ category as On classifies it, and wouldn’t do serious distance in it.

Discover the On Running Cloud

The Cloud X is an evolution of the Cloud, with a more intensive performance focus, and is geared towards runners who also want a shoe that can do proper distance, but is also versatile and supportive enough to be used for gym and weight sessions. The new upper and engineered heel cap add stability for both lateral moves as well as conventional runs. The Cloud X is generally choses by runners who do not define themselves by just one sport.

Like the Cloud the midsole is made of Zero Gravity EVA Foam, however on the Cloud X the speedboard is slightly stiffer, making it better for other gym based activities.

Discover the On Running Cloud X

The Cloudflow is a highly responsive performance shoe and is used by growing numbers of world leading triathletes and Iron Man competitors. The Cloudflow is designed to give the runner more feedback, doing so by offering the most of the Cloud elements in the shoe. It is On’s distance racer offering, with just enough cushioning, but incredibly responsive and fast for those who want to chase that PB, over any distance from a mile to a marathon.

The Cloudflow also has a Zero gravity EVA foam midsole, but the Speedboard is stiffer so it offers the runner the ultimate rolling motion (hence gives you a little more of a push each step).

Given the popularity of highly cushioned running shoes in recent years, On has had a gap in its offering for runners who want a softer, more cushioned ride. The Cloudswift is designed to fill that gap, using a new type of EVA which On calls “Helion”, describing it as their super foam that is designed to increase energy return, fusing firmer and softer elements. The Cloud elements in the rear foot are designed to collapse outwards for a softer landing, however when you reach the forefoot it is closed off so storing more energy for the final toe off. The result is a more cushioned shoe, but it is still an active, engaged ride. However, note that it is still materially firmer than shoes like the adidas Boost, so this isn’t the shoe for those looking for a plush ride.

Whilst On doesn’t make conventional stability shoes, the Cloudswift has a higher arch, so does offer enough support for those wanting a bit more stabilizing of the midfoot.

The Cloudswift has a one-piece engineered mesh upper which is stretchy and highly breathable, comfortable wrapping the foot. It also has a rubber midfoot band. One issue that some customers with narrow feet have found is that your have to over-tighten the band to get a really secure fit. So if you do have narrow feet be mindful of that, and you might want to come and try them in-store.

The Cloudswift is a good all-rounder for runners who want a bit more cushioning, but still want a firmer, more active ride than conventional cushioning shoes offer.

The speedboard on the Cloudswift is designed like a ski, so it gives you a very nice push on your final stage of the gait cycle.

The Cloudbeam design was inspired by the Cloud, and is On’s most clearly lifestyle oriented shoe. The positioning is as an ‘active lifestyle’ shoe for urban explorers; comfortable and stylish enough to be worn all day long exploring the city, but also a more than capable runner for that post work 5k.

Whilst the Cloudbeam is still technically classed as a running shoe, with all the tech inside, there is more focus on the styling and comfort, with a 3D embossed upper, an extended soft-touch tongue, and a wrap-around lacing system, looped for a gentle forefoot hold that stays close as you go further. These are a great option for a comfortable, lightweight (246g/ 8.6oz) all day active trainer. In its relatively short existence On has already proved itself to be arguably the most innovative new running shoe brand on the market. All the Cloud variants are completely distinctive from conventional distance trainers. They are the lightest shoes I’ve ever run in, and they make you feel fast. I think they’re a great option for runners who want a quick, responsive, lightweight shoe that is fairly minimal, but has adequate impact protection. The only drawback tends to be for those runners who want really plush, ‘Boost’ like cushioning. Some reviewers talk of a spectrum of cushioning from 1) barefoot, to 5) ultra cushioned, and put CloudTec at about a 3 on that spectrum, and I’d agree with that after my testing. But ultimately this is just personal preference; there is sufficient cushioning for marathon distances, but some runners may just want a plusher ride. For those of you who want a shoe to push the pace in and strive for that PB, then On shoes are hard to beat.

Check out all the latest styles: On Running Women's | On Running Men's

ON RunningCloud All Black | Men's 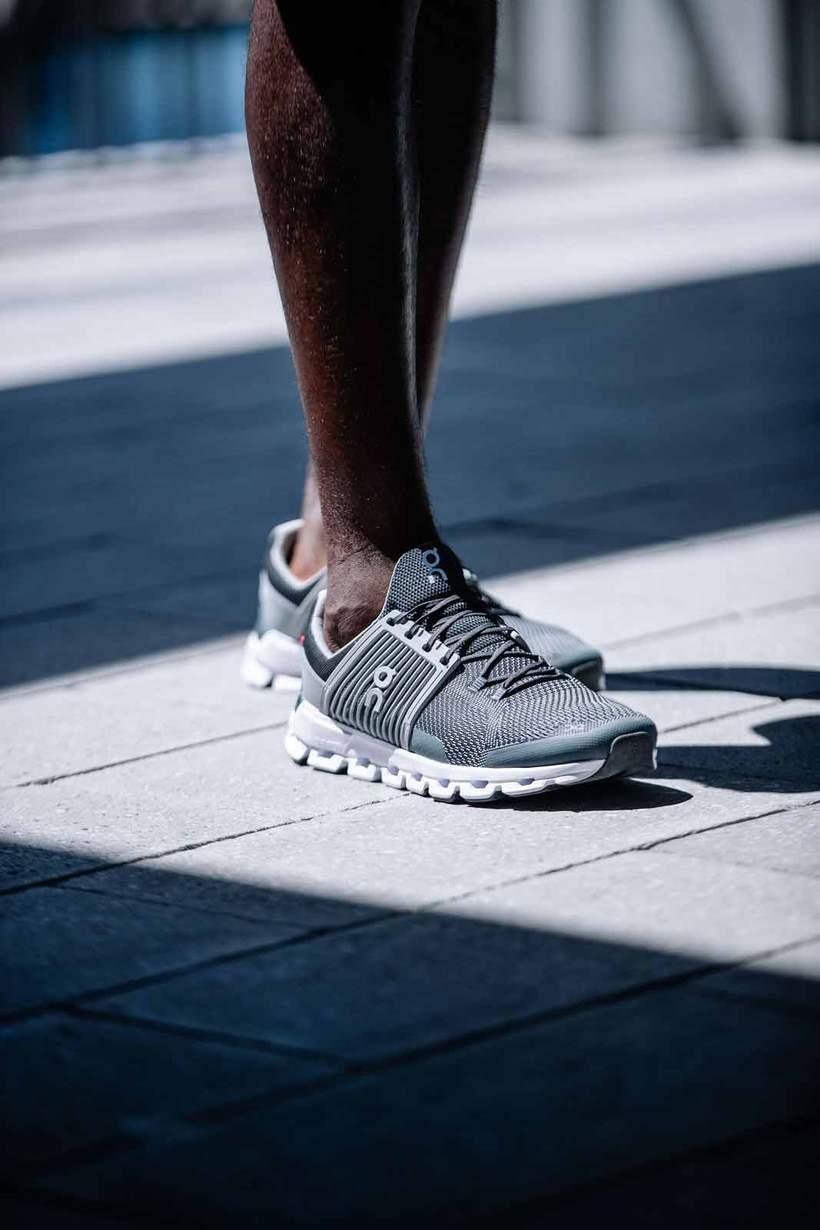 Our shortlist of the best running blogs to keep you motivated, whether you've just started or are a seasoned pro.

The best studios in London to get that spin high