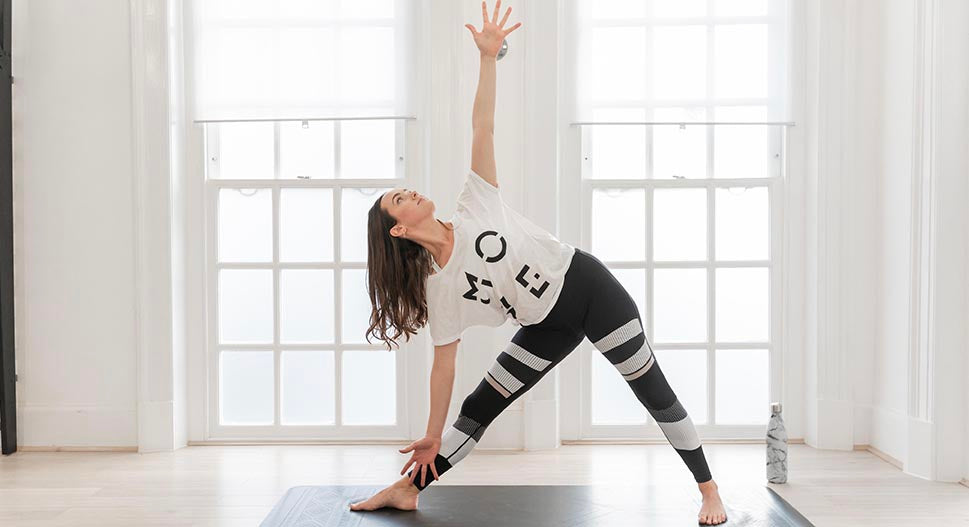 I’ve always been a healthy human. I grew up eating well, exercising moderately and having a good relationship with my mental health, so when I stopped getting my period, things seemed a little odd.

At the age of 23, I decided to get my hormones checked and was diagnosed with having PCOS (PolyCystic Ovary Syndrome). It’s a condition that affects millions of young women in the UK, affecting your ovaries and hormones. Some common side effects are PCOS weight gain, amenorrhea (no periods), and hair growth. It was back at a time where no-one talked about it, or maybe they had and I hadn’t taken note, but it was brand new to me.

I was told on the spot by my doctor that my chances of ever having children were considerably slim, was handed a leaflet and left to my own devices. I still remember going home and sobbing on my sofa left with my thoughts of “surely I wasn’t a woman if I couldn’t have children?” I felt as though I’d done something seriously wrong, that I hadn’t taken care of myself and was paying for it.

How to diagnose PCOS: Signs and symptoms

There are many symptoms of PCOS that manifest themselves in different ways. Some common signs of PCOS are:

In fact, if you only need to have two or more of these symptoms to be diagnosed with PCOS without even a nod at your ovaries by many in the medical field.

The more I began speaking about PCOS, to friends, family members, anyone who wanted to know, the more I discovered just how many women it afflicts (about 1 in 5). Friends I had known for years, who had never spoken about having it and who just silently accepted it and continued as normal.

I had no idea that PCOS was so common. It really shocked me that these brave women were happy to accept their diagnosis and future fertility and go about their lives with crossed fingers. I wanted to find out as much as I could and start conversations about it, so women would feel like they had some control over what was going on in their bodies.

My experience living with PCOS

In a world of instant gratification, meaningless ‘likes’, sensory overload, endless fitness videos, bikini photos, #bodygoalz and a whole lot more, it’s the easiest thing in the world to feel less than confident in our own bodies. To compare, contrast and judge ourselves without too much thought.

The world of instagram can be a tough little cookie to navigate. Six years ago, I fell into the slippery slope of discovering a series of Australian models posting photos of themselves living a rather dreamy life; in bikinis, on yachts, with dogs (life goals I know). The photos began filtrating to my instagram feed, my phone background and even to my daily thoughts; “this is what I need to look like”.

This all happened around the time I was diagnosed with PolyCystic Ovary Syndrome. As a woman in her early twenties, in a world of heightened body image and an increasing desire to look a certain way and to be health-conscious, I felt like a fish out of water. I suddenly felt like I had been doing everything wrong. Why had I been diagnosed with this?

After wallowing in self pity for the rest of the day, I started to research. I spent hours on the internet discovering ways in which I could maybe help myself and very quickly decided that I wasn’t going to just submit to having this condition. I wouldn’t just learn to live with it. I would do something about it; I would take my PCOS treatment into my own hands and turn my life around. And that’s where my journey began.

The first part of my PCOS journey was seeking professional help. I’m not qualified to give advice, I can only say what changes have personally helped me. Seeking the help of a professional should be a top priority. For my part, I began researching a lot into the condition and what lifestyle changes might help manage the symptoms. Managing the best diet for PCOS

PCOS essentially affects your hormone levels. It works by producing more testosterone than usual and raising insulin levels which in turn results in PCOS weight gain. When we eat, our insulin levels naturally go up – particularly when we eat a diet rich in refined sugar, such as breads, pasta and the general sugar junk. Through extensive research, I learnt just how important it is for women suffering with PCOS to keep insulin levels balanced at all times. As soon as the insulin spikes, it can have a hazardous effect on our body, hormones and ovaries.

My diet became the part of my life I was focusing on the most. I decided to start limiting my refined sugar intake (I was previously quite the sugar junkie), upping my intake of cruciferous greens (such as broccoli, kale, cabbage), adding more grains to my diet and increasing my protein intake. I also focused on foods low in glycaemic index (Low GI foods), which I was told can help manage PCOS symptoms, releasing energy slowly into the body. I chose to limit my dairy intake, and took pleasure in making my own almond milk every week.

It’s important to note that everyone’s bodies are different and will respond differently to diet changes. The start of my PCOS diet was a mindful one. I tried to keep my focus on a nutrient rich diet that would fuel my body the right way, rather than look for foods to avoid with PCOS. And I absolutely fell in love with the process of cooking food from scratch, and taking time to sit and enjoy it and to feel more energised from it. Exercise was the next tool I began to use to help my symptoms. I’ve never battled with weight all that much, but I’ve never had a healthy relationship with my body image either. Most of my teenage years and early twenties, were spent wondering when I’d look good in a bikini. Every year was the same story; I would go for occasional runs in the mornings leading up to each Summer, I would eat Special K cereal for 3 meals (how was that ever a thing?) and I would constantly look at myself in the mirror thinking, “next year will be different, next year I’ll look really great”.

When I was diagnosed with PCOS, I began to learn the importance of exercise. Not for looking good in a bikini, not to look the same as the women in magazines or girls on the street, and not just for the Summer. I wasn’t necessarily looking for how to lose weight with PCOS. Exercising became an important tool for health, a positive lifestyle, and what I’ve now learnt, for mental clarity. Feeling strong suddenly became my goal. I was already practicing yoga, but I began to introduce weight training into my routine. I absolutely fell in love the feeling of getting stronger every day, and not for anyone else but myself.

I still had bad days of self-doubt and self-loathing. I remember one day, feeling particularly low about having PCOS and saying to my brother how it’s not fair that I have to work so hard at keeping my body healthy, when other girl’s my age don’t even have to think twice about it. He said to me, “but just think Sarah, you are going to be twice as strong as anyone else. You’re working twice as hard and that’s your power”. His words have stuck with me for the last 6 years and really began to shape my healthy relationship with my body.

From PCOS to Wellness

I think it’s important to not feel alone when you’re diagnosed with any condition. Sharing experiences, talking to friends, writing things down can all help. If I hadn’t started talking to other women about PCOS and learning from them, eventually taking things in my own stride, I definitely wouldn’t have begun the empowering journey I did.

In a lot of ways, I’m extremely grateful for being diagnosed with PCOS. It shifted my mindset. I stopped following the girls on instagram in bikinis on the beach that didn’t make me feel good about myself, I removed their photos from my phone background and I replaced them with people, accounts, and good energy that would make me feel vibrant and alive. My new found control encouraged me to love my body for what it can do. I feel stronger now for taking the doctor’s diagnosis and trying to turn it around into a body positive way of living.

Polycystic ovary syndrome is a medical condition that is thought to affect up to 1 in every 5 women in the UK. If you’ve been diagnosed with PCOS or think you may have it, seek professional help from your doctors or visit the PCOS Awareness Association website here.

Sarah is a London based yoga teacher, content creator, recipe developer & blogger. She teaches in London based studios as well as Yoga retreats worldwide and hopes to empower her students to move in ways that feel good for their bodies, rather than look a certain way. She also creates, styles & shoots recipes for brands, bloggers and herself.

You can join her on the yoga mat at @townhallhotel Bethnal Green, @moveyourframe Fitzrovia, @themovestudios Fulham or at one of her upcoming retreats.

For more info on Sarah, keep up to date with her @sarahmalcs or head to her website.